On 11 June 2021 Fr Ángel Fernández Artime, the Rector Major, with the consent of his Council, nominated Fr Angelo Sylvester Miranda, SDB (known as Roshan), as the 4th Superior of the Salesian Vice Province of “St Joseph”, Sri Lanka (LKC), for 2021-2027. The Vice Province has 102 confreres including missionaries.

Fr Roshan was born on December 27, 1979 in Negombo; completed his High School at St Mary’s College, Negombo, and Higher Secondary at Don Bosco Seminary, Dankotuwa. Recalling his early experience of Salesian life, Fr Roshan declares with joy: “I am happy to say that I was an Oratorian from the Salesian house in Negombo (Mother House). I spent a lot of my childhood time in the Salesian Oratory. The Salesians there nurtured my Religious and Salesian vocation.”

In 1996 he joined the Don Bosco Aspirantate at Dankotuwa and completed his pre-novitiate there. In 1998 he started his novitiate formation at Don Bosco Kotadeniyawa and made his first profession on 15 August 1999. He did his Practical Training at Bosco Sevana-Uswetakeiyawa, Don Bosco Aspirantate – Dankotuwa, and Don Bosco Boys’ Home – Kandy. He made his final profession on 1 May 2006 at the Mary Help of Christians Shrine in the Philippines. He was ordained on 4 September 2008 at Dungalpitiya, Sri Lanka.

After his ordination, he worked as Administrator at the Technical Center Negombo and the Don Bosco Boys’ Home, Murunkan. He was Assistant Parish Priest of Our Lady of Mount Carmel Parish, Palliyawatta, in 2010-2011. He was Dean at Don Bosco – Ahungalla, Technical Center – Pallawarayankattu, and English Academy – Killinochchi. In 2012-2014, and in 2018-2019, he served as Socius of the novitiate at Kotadeniyawa. He served as Rector at Bosco Sevana – Uswetakeiyawa (2014-2015) before going to Italy for studies. From 2019 he served as Vicar of the Superior for the Vice Province and as Delegate for Youth Ministry in the Vice Province since 2020.

Fr Roshan has also a Master’s degree in Salesian Spirituality from the Salesian Pontifical University (UPS) in Rome (2016-2018) and has undergone training for Rectors and Formators at Don Bosco Renewal Centre, Bangalore (India), and a Formators’ Course at UPS, Rome. He speaks both Sinhala and Tamil, the island’s two main languages, and English and Italian.

Fr Roshan takes up the baton of leadership from Fr Joseph Almeida, SDB who ably served the Vice Province in the last six years; he is going to begin the leadership of a very young and dynamic group of confreres whose median age is 34.5. 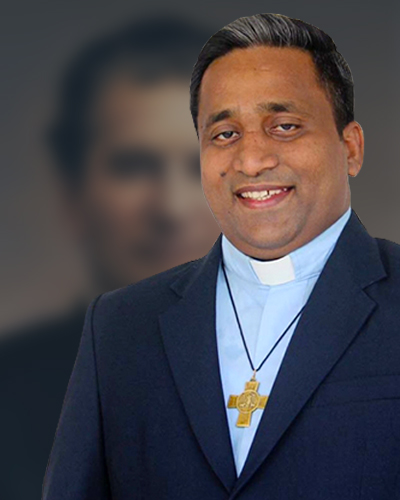 Greetings and wishes for the Month of our Lady of the Holy Rosary!

OUR LADY OF THE HOLY ROSARY

The Holy Rosary is a beautiful Mari’ an prayer of an individual, community and a larger congregation. The entrustment of our congregation to our Blessed Mother and the daily renewal of our consecration is a fundamental requirement for us Salesians, “that we may become witnesses to the young of her Son’s boundless love” (C. 8). We Salesians are committed to the spirituality of the Holy Rosary. The uniqueness of the Salesian prayer is characterised by Marian piety and devotion. We pray with Her because she is “a model of prayer and pastoral love, the teacher of wisdom and guide of our family” (C. 92). “We develop a strong filial devotion to her. We recite the Rosary each day and celebrate her feasts to encourage a more convinced and personal imitation” (C. 92).

Imagine the widespread Marian rallies, miraculous healing taking place in Marian temples, apparitions, and prayer gatherings attracting hundreds and thousands of young people, old, sick and the pilgrims all around the World by our Blessed Mother. In the journey faith of every Christian, the recitation of the Holy Rosary and the singing of the Magnificat echo the memory of the angelic voice of God “Hail! Mary full of grace” (Lk. 1, 28). In the teachings of the Church, the place and the dignity of the Holy Rosary is elevated to a “Sacramental” prayer throughout the World in all languages and art. Thus, the Holy Rosary becomes a rainbow of faith and piety, contemplative in its very essence, dear to all the saints and holy souls.

The Catholic Bishops’ Conference of Sri Lanka has launched a special Marian Virtual Pilgrimage from Matara to Madhu Shrines this year. To save the country from the disturbance of the Covid Pandemic and other sufferings. I request all the Salesian houses to participate in this event with your communities and boys actively and promote Marian piety and intercession. Please note some of the essential pilgrim appointments in various dioceses and Marian shrines of the country: 02nd at Matara, 07th at Galle, 09th at Thewaththa, 1 lth at Negombo Grand Street, 12th Kandy, 23rd Thalavila, 24th Chilaw, 27th Jaffna, and 30th Madhu. You can follow these events via Verbum TV, Radio Seth and other online platforms. The Rosary unites us as one family, pray every evening between 7 and 8 pm wherever you are.